Barracuda Bay was an area in SplashTown at Darien Lake. It was the original water park area the "Barracuda Bay" moniker was introduced in 1990. When Barracuda Bay opened it was originally an extra charge attraction, but was later included with theme park admission. The only slides that were operating at Barracuda Bay was 'Cuda Falls since Floodgate Falls is currently standing, but not operating and the other slides, Cascade Canyon , Pipeline Plunge , Riptide Run,and Torpedo Rapids were removed. 'Cuda Falls was removed in 2014 making the area now defunct. In 2010 the Barracuda Bay changing rooms were demolished for a patio area and the old 'Cuda Falls entrance was turned into a locker house.

The Barracuda Bay entrance house circa 2009

The view of Barracuda Bay from the Giant Wheel 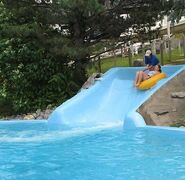 Cuda Falls water slides
Add a photo to this gallery

Retrieved from "https://darienlake.fandom.com/wiki/Barracuda_Bay?oldid=5387"
Community content is available under CC-BY-SA unless otherwise noted.